Hand made, with love

Every company has a story. This is ours.

How it all started

Relish Ink was founded in 2008 by three friends - Jonathan Turner, Cullen Seward, and David Roddy. The idea sparked when Jonathan, in the middle of his second year playing football at Salisbury University, decided he wanted to become an artists. As the good business majors Cullen and David were, they advised against it. Per usual, Jonathan was persistent, and insisted on making the move. The three of them then decided, in order for Jonathan to pursue his art career in the best way, they needed to create a brand..

" That’s why we created Relish Ink - to be a brand that stood for fine artists. "

After a bit of hookah, and too many beers, Cullen suggested the name ‘Relish’. That word resinated perfectly, as the team already lived by a motto - Relish the Moment. The addition of ‘Ink’ to ‘Relish’ is where things began to come together. ‘Relish ink’, in our eyes, meant to cherish the process of creating fine art. Whether it was music, drawing, dance, or any fine art, we loved the craft. However, we also knew the difficulty of being successful in the fine arts. 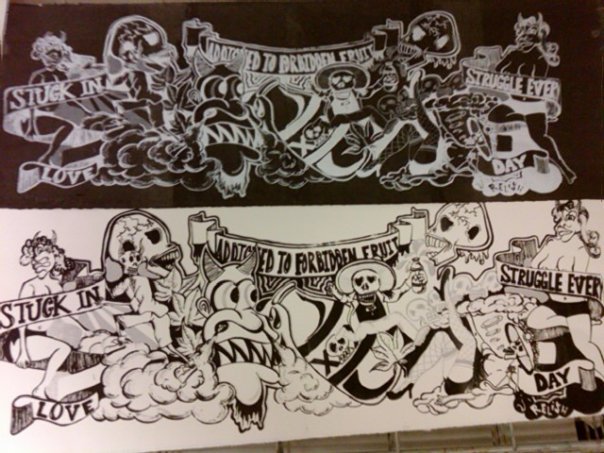 We knew where we wanted to go, it was now time to implement it. The first round of shirts were nothing to brag about, but they are part of the story. Its was late 2008 when David and Jon made the first set. With a short trip to footlocker, the two brought six blank shirts and brought them to the university of Miami’s school of arts studio. Luckily, Jonathan knew the professor, who kindly let is in. What he did not know, is that we also brought a case of Budweiser with us.

We took an original piece, and walked through the screen printing process ourselves. Building the screen, using the light table to burn the art, rinsing the film, and printing our first batch of shirts.

While David was at work, he overheard his boss speaking to a gentleman about an upcoming fashion show he was putting together. The show was called Bourgeoisie and Proletariat.

He explains lained something where Marx acknowledged the bourgeois industriousness that created wealth, but criticised the moral hypocrisy of the bourgeoisie when they ignored the alleged origins of their wealth: the exploitation of the proletariat, the urban and rural workers…. and how he created a theme like that. He had several high end clothing lines, but needed an urband/rural brand. Without asking permission, I told the man I was part of a brand that sounded like what he was looking for. The gentleman asked if we could deliver a full linve, two 20 foot murals, and several framed pieces of artwork. The issue was, he needed it done in a week.

I knew this was a big chance for us, so I committed without consulting the team. When I had the chance to call jon, he couldnt be more excited. Knowing this was a chance at our first fashion and art show, he was honestly thrilled. Until I told him we had a week. Then he told me to go f&$@ myself.

I asked what it would take to get done, and if was even possible. He told me it was, if he had $400. Thats when I hung up and called my financial advisor, Lisa Roddy (my mom). Knowing how much it meant to us, and how much she believed in us, she overnighted him a check.

Jon then proceeded to graffiti two twenty foot murals, paint several skateboards, grabbed 10 pieces of art, got on a plane, and made from Miami to DC on the day of the event. When he arrived, we all scrambled to frame the artwork, and get setup at the event. Thank God the people there were actually professionals, and had done this before.

Our role at the event, was to be the street brand. We had a corner table setup with shirts, decks, art, and some business cards. I remember vividly how many people came up and complimented us. One in particular did something that would give us our big break.

I noticed Jon talking to a man for quite some time. Ironically, this man went the same high school as us, and was a model at the event. It was a fashion show afterall, with several reputable georgetown boutiques. The man asked if we wanted him to model our shirts. This is something the gentleman told is specifically not to do. Luckily, we had an in.

In my eues, this was the moment where things became real for us. Although a lot of people had walked over to see Jon’s art, this was a chance for everyone to see it on a walkway. The man who grabbed the shirts from us managed to get a few other models to wear our shirts. They were simple white tee’s, but they had jon’s original artwork hand printed like our first line.

Honest to God, the crowds reaction made it clear we were rhe favorite in the room. We were all standing next to eachother realizing what was happening. We were going to be a real clothing company.

I’m not lying when I tell you that people loved Jon’s artwork, and I was no different. We were all blow away at how talented he was, especially in such a short time. I kid you not, while he was studying art at Miami University, everything he painted was for Relish Ink. Not only was he talented, but he was incredibly dedicated.

All good stories come to an end

Tragically, on Dec 3rd, 2010, Jonathan Henry Turner passed away. It was very sudden, caused by some rare heart issue. ItS impossible to describe how this made family and friends feel. Trying to move forward as a human seemed impossible, let alone moving forward as a company. I dive into it a bit more in an open letter on our blog, but to us, Jonathan Turner was Relish ink. You know, a lot of people called him a free spirit. But make no mistake, he wasn’t just some bag floating in the wind. He was a rocket ship, headed in any direction he wanted. Making Relish Ink a sucessful company was his mission. To provide for his mom was his mission. Every piece of art he created came from the flow of emotion and love he had for his family… and it reflected in his art.

As a company we tried to host more events, but it wasn’t the same. Things eventually started to slow down, ultimately coming to a halt. The business, the friendships… all of it… because I stopped it. I’m not fishing for sympathy, but it’s important to share. Carrying on something like this I know is the right thing in my heart. As difficult as it is, the spirit lives on. Jon affected so many people in this world, in such a positive light, the spirit of Relish Ink can not die. It is in many of us. The ones he loved know all too well what it means to Relish the moment… to create. And so we shall. By hand, with love. On a much smaller scale, we get back to basics, and carry on. Always remembering Jonathan Turner, the artist. 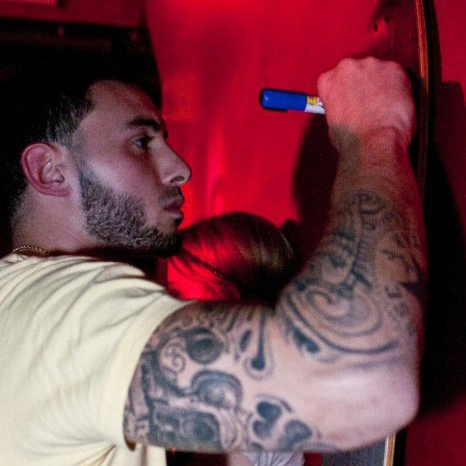